After we got our first taste of modern VR with the Oculus DK1 developer kit, we went on a quest to see if any technologies could mimic the natural world as closely as possible. In the image on the right, you see one of the earliest prototype 360 stereoscopic camera rigs we 3d printed back in 2014. Although it completely melted our post-production pipeline at the time (it could spit out video over 12K at full resolution!) and was notoriously stressful to work with, it put us on a trajectory to the company we are today. 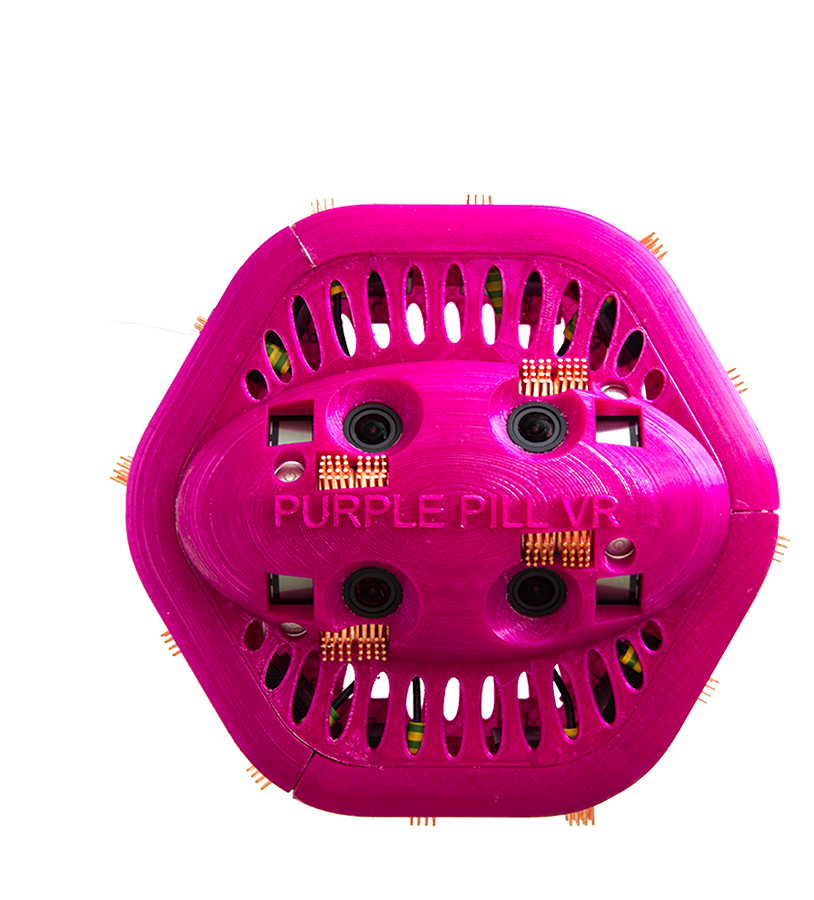 Headjack originated out of Purple Pill, our dedicated VR production studio we started back in 2013 with a clear focus on high-quality 360 videos and custom VR/AR app development. We made significant contributions to the community by sharing our insights through our blogs and helped out a lot of other VR production studios by open-sourcing a lot of our in-house production tools.

To better align our product portfolio and serve our Headjack clients before, during, and after production, this eventually led to the move of all Purple Pill services under the Headjack brand in 2019.

Content production is and will always be at the core of our operations because it drives almost everything we do at Headjack.

From the start, we have been focused on fixing the broken distribution chain for ourselves as a studio and the industry. The development of Headjack started in 2015, and after a lot of blood, sweat, and tears, this eventually led to the public release of Headjack in 2017.

After the public release of Headjack, we gradually shifted our focus to custom app development with the Headjack CMS at its core. Over the last six years, we worked on and successfully released more than a hundred custom VR projects in collaboration with agencies, brands, and other production studios from around the globe.

Over the last couple of years, our primary focus has been building Headjack into the platform it is today. Our products have seen several iterations and are used daily by hundreds of users on any corner of the globe.

We are very proud we have been around for so long, especially since the premature VR/AR market went through several boom/bust cycles, and we have seen some great companies fail. Luckily the market has become more mature now, and there are great opportunities for companies like us who lived through the storm.

We are still committed to building and supporting the XR community by sharing our knowledge and production tools, just as we did in 2013 when a VR headset was not more than a smartphone screen strapped to your face, and the "Metaverse" was still a concept from novels.

Headjack will continue to back businesses, artists, developers, distributors, and like-minded VR nerds with our software and tools, and we hope to do so well in the future!

We sent a few paragraphs outlining our ideas for the business to some people we knew, initially just for feedback, and within a week we had enough money on our account to get started!

We released an MVP to the public to test our assumptions that there was a need for an automatic solution for video distribution to VR Headsets.

With the second investment, we started working on what would become Headjack. We increased our headcount in our business's production side (Purple Pill VR) and grew the Headjack development team.

We let the first 100 users into our platform, and used their feedback to prepare for a public launch.

With our third investment, we started working on our SaaS funnels and building our product's solid architecture required to operate at scale.

By the end of 2017, we finished our 50th production in the Purple Pill Studio.

The focus for this round is to optimize our sales funnel and fund the development of the next generation of Headjack.

Pivot to software only

After the VR bubble burst and all our projects in the studio came to a grinding halt, we doubled down our efforts on the software side of our business. We started perfecting the UI and UX and began work on our first Unity integrations.

With our third investment, we started working on our SaaS funnels and building our product's solid architecture required to operate at scale.

After a challenging year, our prospects began to look brighter, and we were close to breaking even when Corona broke out, wiping out more than half of our revenue and putting many of our customers out of business.

Luckily we managed to secure a bridge round which helped us weather the storm and build our product as planned.

While we entered a new reality with continuous lockdowns and enforced work-from-home policies, we had to work hard to find our market fit again. We had to rethink our pricing strategy and how we acquired new customers and retained existing users.

At the beginning of 2021, we finally saw our active users and revenue growth again in the double digits and encountered our first scaling issues. We needed to move most of the production servers to a new architecture and started finalizing our support channels and documentation.

2023 is shaping up to become one of the most exciting years to come for the VR market since the release of the first Oculus headsets in back 2013. We will see the inflow of tech giants like Apple and Google entering the market, which will race the bar significantly regarding where we need to be with our product offerings.

That is why we started working on a new and improved Headjack that will lay the groundwork for future years and serve the new influx of professional content creators into our market.

Go to Trello Board